The power base of the newly formed Galactic Alliance can be found here, struggling to oppose the tyrannical Empire.
Post Reply
6 posts • Page 1 of 1

It was with a growl and a thud that Kyr hit the ground, having leapt from the door of the transport before it touched earth. His boots sank slightly into the soft dirt and a cool breeze brushed over his horns.
Shouldering his pack, he set out, one foot in front of the other. He’d gotten directions earlier and knew his way.
Behind him, struggling to keep up, were a pair of armed guards, young and terrified, clearly wondering what they’d done to deserve this job.
Despite the apparent acceptance of his offer to help against the Sith, the Galactic Alliance still evidently felt he merited watching. That, or someone to protect him from anyone who might feel angered at his presence-he had, both by his orders and his deeds, killed many Alliance soldiers, after all.
A group of visiting Naboo dignitaries on an inspection of the site-a tour, more like-gawked openly at both his appearance and his disregard for whatever rank they held. Kyr had to hold back a grin-on their soft, coddled planet, he doubted they had ever seen anyone quite like he.
He knew what was to immediately come, but past that, he was unsure. A meeting with “persons and agents of importance” was all he’d been told.
Top

A Master along with her Padawan were on route to an important meeting, requested by the GA themselves. The Jedi Council were of course informed and allowed them to attend. Adar was happy to get out of the Temple and not be on a mission. Of course, any request from the Alliance could be seen as a mission, or a test of prowess. But the Padawan was relaxed, but never breaking out of his Jedi manners. The Master was taking a look at some files, checking what Intel the Jedi had on this person they, and a few notable Alliance personnel, were going to meet. While she was doing that, Adar decided to enter into meditation, until his Master had finished reading. And that would take a while, as Master Vassa liked to be thorough in her research. She was after all, a Jedi Consular.

A few hours after that, minutes before landing

The Master and her Padawan were sitting down, talking about present events, as well as the Coalition. They really liked each other's company. They were paired less than a year ago, and they were already bonded. The fact that both Adar and Master Vassa liked to talk and could strike deep conversations surely attributed to that bond being formed so quickly. Suddenly, Adar remembered to ask about the meeting they were attending.

"Why yes, we are to meet an individual that has put an end to many Alliance soldiers, that only resently was captured by master Kenobi and Ranger Captain Badash."
"Do we know why?" he asked with quriosity.
"Patience, Adar. We shall she when we arrive."
Adar quickly responded "You mean you don't know?"
Master Vassa took a deep breath. "No, but I would guess to get information out of him. No one can lie to the Force."
Adar let out a smile "That is true. Oh, we appear to be landing."

As soon as the ship landed, the pair were greeted by Alliance personnel, and we're escorted towards their meeting. 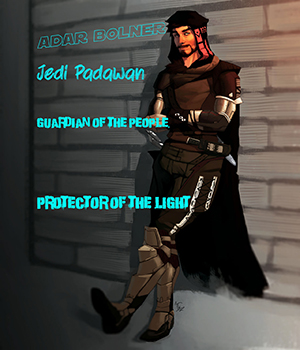 Well, this would certainly be interesting on how this would play out. Aliclair briefly met the reasoning for this get together, and she wasn't sure on how to feel. And still didn't know how to feel. Ali landed her YT-2000 Talon , instructing her crew to do as they pleased, but to not interrupt the meeting. Jittered shot up the padawan's spine, and it caused her to pause before getting up off her pilot seat. Leaning her head back, and using her hands to brush against her face, she huffed out any nerves that were shot and stood, then exited the Talon. She wondered if her Master would catch up with her during this official meet and greet.

She dawned normal attire, with her training sabre within a holster located on her lower spine. So semi concealed, to those not paying attention. And without a cloak to better covered. Since the sabre was a downgraded version of the lightsaber, she decided it was best for defense. And maybe even intimidation since getting touched by the activated plasma blade didn't tickle. She stepped into the designated room for this event with the assistance of an escort, blinking and scanning. There were familiar faces. Some new. She gave brief greetings to those she recognized, but ultimately decided to seat and drink her water, since there were no access to alcoholic drinks at this time.

It was only minutes later that three Jedi entered the room. Two were unknown to him, but the third he had met briefly-Kenobi's apprentice.

He stood at parade rest, with his hands behind his back, lips stretching into a grim smile. But then, most of his person was essentially grim-his scars, the red skin and dark tattoos. His horns accentuated it, adding a veneer of menace that, along with his size, made him an intimidating figure indeed to most.

He did not make the mistake of assuming that Jedi were to be intimidated, however. Even Padawans were dangerous in combat, and one of the Jedi had the look of a Master, a dangerous one to make an enemy of.

His smile stayed as they took their places in the room. Then he gave a slight bow. "I am Kyr'amur Null, formerly of the Imperial Navy. Whom do I have the pleasure of addressing?"
Top

Master and Padawan were escorted into a room by the Alliance personnel. It was mostly empty when they arrived, except from a few GA officers and one politician that Master Vassa recognised. What surpised them both was the fact that this did not seem like an interrogation room. More of a conference room, like where the boards of big companies would meet to discuss. It would seem that they had misjudged their role here. They were not here to get information, at least not necessarily. They were here to meet an Ex-Imperial, and see what his intentions were. Or that is what those currently present told them when they asked about it.

"Well this is interesting Master. You think he had a change of heart?" said Adar, while taking a seat. This man was becoming more and more of a mystery to him. He almost could not contain his curiosity. Though he made sure not to break his posture. This was an official meeting after all.
Master Vassa did not respond for a while, for she was deep in thought. She tried to think if she ever knew an Imperial by that name, and if he ordered the attack that...
"Master?". Her Padawan's voice broke her concentration.
"Although it is a possibility, not many people of his rank choose to defect. But it useless to speculate now. We shall put our faith in the Force, and we shall see this meeting to its end."

As more people joined the meeting room, Adar could recognize a few. Mostly famous military or navy officers or politicians. But at some point, he spotted an unusual presence in the Force. A trained, or a least trainee, in the ways of the Force. Another Jedi had joined the room. Before he could even get up to find them, Aliclair had approached him. She greeted him, and he greeted her back. It was nice seeing a familiar face, and he sensed she felt the same way. He wondered why Master Kenobi wasn't with her. Would he catch up later? Or was she here in his place? No matter the case, Adar knew she would be a great representative of the Jedi Coalition. But before he could ask her about it, she had left to great the others. Adar smiled. Master Kenobi has been teaching her well. She would later come back to sit next to him, and he was sitted next to Master Vassa, but by then the "guest" had arrived.

Most people scoffed at his pretentious first words. One man was about to tell him "We are the ones asking the questions here" but before he could even say a word, Master Vassa rose up from her seat and waved towards him in a calming way. After all, Kyr'amur was mostly addressing the Jedi. "I am Master Vassa, Jedi Consular." And with that, she took her seat once more. Adar followed next, to follow his Master gesture. "I am Adar Bolner, Jedi Padawan of Master Vassa." As he rose, his brown blouse was fully visible and his black cloack with red stripes at the hood moved elegantly with him, though he wasn't wearing his hood on. It was gently resting behind his neck.

After his introduction, he was seated and waited. He could feel the resentment of the other GA members, and perhaps a hint of satisfaction from Kyramur. This was going to be an interesting meeting for sure.

Hm. So he did have formalities about him. Aliclair watched with opalescent blue eyes as others gathered, along with Padawan Bolner. A small smile accompanied her face as they briefly greeted each-other, than sat together. She placed her water on the table, than she sat up. It was time to do an official meet and greet.

While it was unclear if Ali was here in the stand of her Master Kenobi, or on her own terms, she'd been requested to attend. So, she did. First, Jedi Master Vassa introduced herself. A respectable woman; slight jealousy within Ali's heart as her own Master couldn't attend but it was brief. Than, Adar Bolner introduced himself.

Ali gave a small sigh; she didn't want to introduce herself but she wanted to keep the flow going smooth. She represented not only her Master Kenobi but herself, as a Padawan. And of blueblood. The she-padawan brushed her hands over her shirt as she stood to straighten it. Slightly dipping her head, she spoke. "I am Aliclair T. Austjor, Jedi Padawan of Master Kenobi. It's nice to formally meet you under better circumstances, Mr. Null." She said before taking her seat.

Return to “The Galactic Alliance”