Driven from Coruscant by the Galactic Alliance, the governing body of the Galactic Empire now resides upon the fortress world of Bastion.
Post Reply
21 posts

She stood looking out the window of the Inquisition building. Mobs of people were on the street celebrating since her return. "News of the Grand Inquisitor's return with the capture of the Infamous Lady Kota.." the news started on. She turned it off,.the empires need to lie was the last of her concern. Kota's mind was elsewhere, she needed to figure out how she was going to get the Kash back.

There was no easy way she could figure out without causing suspicion. She sighed, this was going to be quite difficult. A knock came at the door, Brutus entered. "It's good that you have returned. Will you be at the celebration today?" He asked. Kota eyed him through her helm. "No." She said as she took a seat. She wanted no part of this illusion when she had far greater concerns like protecting her daughter. 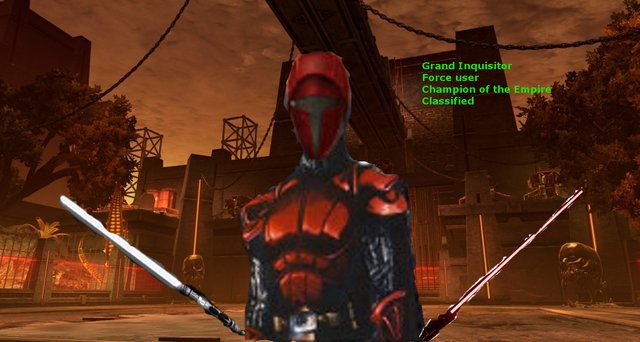 He looked at her confused. "But you're to recieve the highest accommodation ever. You have achieved something no one else has, you captured Lady Kota. You put an end to the longest hunt in Empire history." He said. She didn't care about any of this, it was all an illusion. The things mattered to her where out of her control. "I still don't care about any of this." She said.

Accomplishment of something that was a lie was not an accomplishment. However the people didn't know that, they only saw the fake video created to help her return under disguise. She continued to look out the window as the people continued to celebrate. 'So this is how my freedom dies.' She thought.

Brutus didn't understand how she could feel like this, she had achieved something no one in the Empire could, yet here she was not wanting the reward or celebration. It was confusing to him, yet it was perhaps why she was the Grand Inquisitor. 'Modesty even at the highest achievement.' He thought. However he felt that she earned it, perhaps there was a way to get her to accept the reward."You get to name any ship as yours."He said.

She stared trying to figure out what to do when she heard him. She turned. "Any ship...." She said. An idea had come to mind, a rather bold one. She wasn't sure how it would work or what would come from it. 'A chance at least.' She thought. Kota took bold chances, however she would have to deal with the falsehoods. "Fine." She said as she followed him out towards the idiocy.

Prazutis had returned to Prakith to oversee security and to do a bit of meditation in the process, being surrounded by such force energy that could fuel him, if he could pull the bits of darkness from the usually neutral territory in the force.

But as he sat in the one of the meditation rooms, the more he thought to himself, the more he was enraged at the situation.

The highest achievement, for simply being rescued, and by himself, no less. This “Lady Kota” must have been the Grand Inquisitor herself, a fact he surmised from the rescue and situation thereafter, but also a fact he had no interest in, save for there now being one more person between him and becoming that which he had yearned for: the title of Grand Inquisitor, and becoming a true agent of the Empire, as Lord Vader once was.

But this celebration had become one giant spit in the face for Prazutis. No thanks given for his part in the Grand Inquisitor’s rescue, no credit given for his activity in hunting the Jedi, and most of all, credit given for the “Grand Inquisitor” for an empty illusion, a ploy that the military is now commending. If nothing else, Prazutis thought, HE should have been given such credit, for rescuing the woman in the first place.

In a backwards way, Prazutis did “Capture” Lady Kota. He freed her from the cell, retrieved her weapons, and at least had a part in disposing of the guards that opposed her freedom. It should be HIM receiving this commendation, it should be HIM being celebrated...

It should be HIM holding the title of Grand Inquisitor.

But what was he to do?

He was no Sith, who could simply duel those above them for their position... but he knew he deserved more than what he had.

Prazutis stood, exiting the meditation room, walking towards the Grand Inquisitor’s office, seeking... something. Recognition? Praise?.. Power? He wasn’t sure. But someone as powerful as he had felt Kota was must have something for him.

As they made their way to where the celebration was being held, Prazutis had come across the way. She stopped. "Go ahead Brutus." She said dismissing him to get to the hall. She waited till he was gone before addressing Prazutis. "You want a reward or credit, both most likely. I'll see that the council gives you what you want outside of my job. So what is it that you want?" She asked. There was only one thing she wanted out of this so called celebration.

This was a precarious situation, knowledge of her identity could destroy the Empire. Argus was now lord reagent, the fact that he had signed off on her would send the Empire back years. As well as destroy the Inquisition, everything would be beyond repair.

As Prazutis entered the quarters of the reinstated Grand Inquisitor, past Brutus, the man he saw as his biggest rival up to this point in time, the outrage he had only expressed within his own mind turned to confusion in the face of Kota's words...

What had he been looking for in coming here? Trinkets were of no interest to him, credits weren't why he served the Empire... so what was it?

"I want knowledge. Obviously, there is more to this celebration than what we see..."

Prazutis looked outside, ensuring no others were around before shutting the door.

"Who are you, really? Lady Kota... Why are you serving the Empire, and why are you being celebrated when all you did was get rescued from a Hutt cell?"

Prazutis had connected little of the dota before him, and now sought more answers than he assumed the Grand Inquisitor could give.

A loaded question, this was going to take a while, so she took a seat. "Lady Kota is serving a life sentence in prison for her crimes against the Empire. She was brought in by the Grand Inquisitor, thus closing a long standing warrant or did you not read the official report." She said. She eyed Prazutis through her helmet, she knew that this was not what was true for him.

"Lady Kota does not serve the Empire, nor can she, old men on the council would never allow that. The Grand Inquisitor however can and if this veil is removed the Empire falls. Two people know the truth, Doren Vassyl and the Lord Regant Argus, now you... (She pauses) without the Grand Inquisitor there is no Inquisition, no sentinels, no means to handle force users, & no security. Do you understand?" She said. She waited and watched. Kota had only covered the bases of his question at the moment. He needs to understand this before she could cover the rest

Prazutis crossed the arms of his armor, his helmet dipping down more in a sinister glare from his empty eye holes than anything. She had began with only the lies that were in imperial record, but once she explained her point, that was when Prazutis had the true questions.

Prazutis hated the thought of disloyalty. Now Knowing Kota's past, trusting her with such a position seemed like waving your arm over a Sarlacc pit.

To the point, what did she want? She closed the curtains, made sure no one could see in. Very slowly she removed the helmet revealing her face to him. She looked as she did when they freed her from the Hutt's cell. "I want to go home...I want my daughter to be free to use the force as she wants...I want to be left alone. However I can have none of these things. So I serve the very thing that would deny what I want. Why you ask? Because I am tired, tired of running, tired of anything else I would want being forced from my hands, tired of not knowing what is going on at home, tired of not belonging anywhere." She said with sadness.

She was tired of it all. "By doing all of this I hope to reclaim something I can't have, even if it's just something small. However cause the council will never see me for more than a war criminal I have to use a mask and a title to do it." She said then she put the mask back on.

Prazutis nodded, thinking to himself. She was simply doing what she had to in order to protect those around her... it seemed like a fair reason to be involved in all of this, however she had no end in sight for her duties.

“I understand. ” he blankly said.

He now wanted the Grand Inquisitor out of her current situation. Not only because he had been fighting for the spot, but because he knew that her loyalty wasn’t with the Empire, but with her family. However, he didn’t particularly see that as a bad thing. He once dreamt of having a family as well...

“What do you believe you’ll have to do in order to secure safety for your others within Imperial territory?”

Return to “The Galactic Empire”